To Guillermo and Pepe

One year ago we started the structural consolidation works of a building located at Carrera de San Jeronimo, in Madrid. We have had four months to analyze the structure, which showed a serious decay and had suffered several collapses.

Within two weeks from now we shall complete this job, which with no hesitation has been the most changeling one for our practice over the course of the last ten years. When we got the commission we knew it would be a taught job, not just because of the building condition, and that it was a listed building but even more because of the precedents. We did not have all the information on these and what we had was messy and contradictory.

Our job philosophy is to search for talent, we always look for collaborators who can bring additional value. At this particular case we needed not just value but also courage.

We decided to count on Aliva Engineers and on Proskene, the first ones due to their experience on complicated structures and the second due to their knowledge of heritage preservation. The credit worthiness of both companies was proven and we have been able to test it over the last twelve months. It is not so easy to anticipate though the dedication, involvement and commitment of the persons that the companies may assign to a particular job. In this situation web et on long years friendship, synergy on working methods and after two or three kick-off coffees we dived in to this hazardous job. 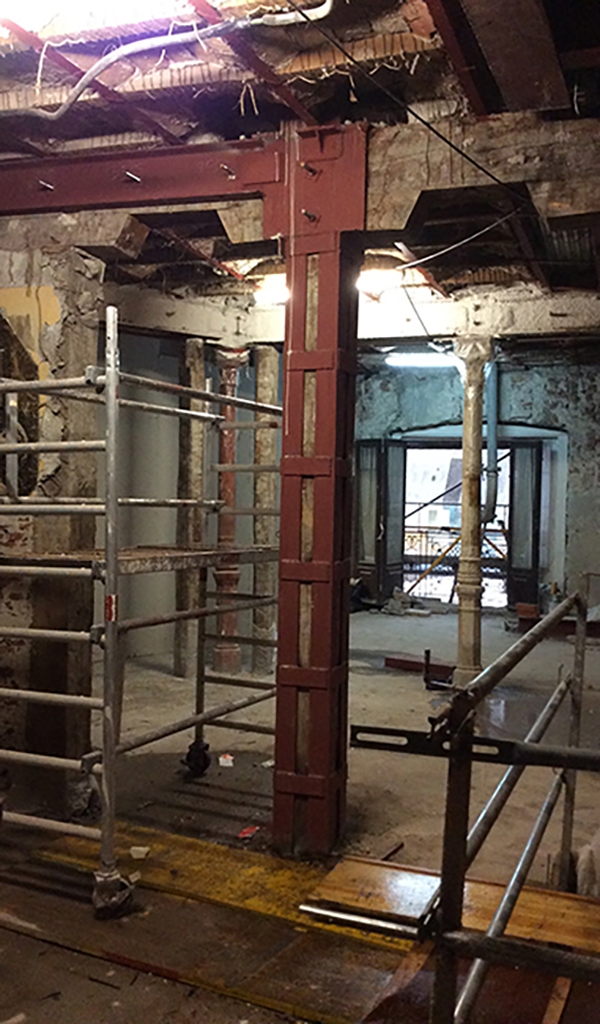 Twelve months and many coffees later, (decaff ones lately), we see that our office and me in particular have been extremely lucky and been able to turn a complicated job into a fascinating learning process. The initial arguments on how to sustain structure that was literally collapsing, without compromising its listed condition or the workers and occupant’s security have driven us to a fantastic result. It will not be easy for those who have not shared the process to appreciate the beauty of a metal bracket, a graft at a post or an anchor beam embraced by two UPN profiles. At every structural knot or reinforcement we see the enormous effort of three teams who have put many hours, discussions and agreements which have made possible what back in May 2017 seemed impossible.

Thanks to Guillermo and Pepe for having taught us so much during these months and for always having been able to reach an agreement at Hontanares.